You are browsing the archive for Events. 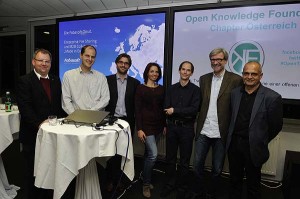 FOTO: Copyrights: Fabasoft AG; Fotograf: Peter Ehringer
After a short introduction by Helmuth Bronnenmayer (Board Member of OKF-AT) telling the ~ 35 people of the audience about objectives and activities of the Austrian chapter of the Open Knowledge Foundation (see slides: http://de.slideshare.net/okfo/okf-atmeet-upopentransport20131114) the topic of the MeetUp was introduced by Peter Parycek (Danube University Krems) and Robert Harm (open3) by giving an insight in the area of Open Transport in the MeetUp keynote – see: http://de.slideshare.net/okfo/okf-atmeet-upopentransportkeynote. Peter introduced the idea of open transport (data) and showcased the importance to open up transport data to (beside others) enable cross-border mobility services and apps. He also introduced the ODP AT – the Open Data Portal Austria project that develops an open data portal for all data – beside government data – in Austria (science, education, industry, NGO & NPO, citizens, OpenGLAM, et al) that will be launched in May / June 2014.
END_OF_DOCUMENT_TOKEN_TO_BE_REPLACED

When you check out the program you can see that there are a lot of Open Transport sessions happening. You’re of course most welcome to join in!

On Wednesday between 14:45 and 16:00, we are organising a workshop with various people from our community giving a short lightning talk, but mainly with a discussion on what our future vision should be. This is the program of this workshop:

We ran the event together with the local transport provider, the Berlin government and the FH Potsdam.
The VBB released GTFS data, opened up their API and provided some geo datasets about entrances to stations.

We had over 120 people registered, lots of them were developers/designers and we had a really inspired atmosphere.
The output in numbers of apps was not as great as we would have liked due to broken datasets and the complicated API, but I think we will see some nice apps in the coming months.